Better late than never... well, that seems to be the general theme of this challenge. And better some than none, too.
Even though I am late with this, I want to thank all those four who participated in this challenge. Since there were so few sighn ups and some drop outs, those that remained did their best to deliver, even if life and motivation threw obstacles in their way. And they all did deliver, even if not always what they signed up for. So thank you all for your hard work and your creativity!

Under the cut you'll find the very short masterlist of entries, sorted by country.

Title: scared that you won't be waiting on the other side
Fandom: Supernatural, Football RPF
Country/sport: England, football.
Ships/Characters: Dean x Cas; Castiel, Dean, Sam, Crowley, Balthazar, Kali, Gabriel
Rating: R
Word count: ~5,500
Disclaimer: the rpf aspects are just that - harmless fiction and not meant to tread on any toes. Not even going to pretend I own the cast of Supernatural.
Summary: Soccer AU. Castiel is the Arsenal defender who's being courted by New York Red Bulls agent Sam Wincher for a transfer. This is twenty-four hours in Dean's life, during which he tries to be assistant coach to a bunch of crazy footballers, and tries to sabotage his brother's grand plan to steal his club's star player. Which he does by sleeping with said player. Stellar plan.

Author's Note: all my love to

vail_kagami for being so impossibly patient with this.
This piece is obviously fiction, and absolutely not true to life. All real-life details are mostly accurate, and definitely over-simplified. Castiel is not a stand-in for any real-life Arsenal player, not least because those transfer sagas never had a happy ending. There are no take-thats at any real-life club player, former or current. Honestly.

"You hit me."
"You were a dick."
Dean blinked. Not because it was the first time he'd been called that (oh no, Sam had beaten him to that one centuries ago) but because it was curiously strange to hear the profanity roll off Castiel's tongue. It was fascinating and vaguely dirty at the same time, as if he was watching Cas twist cherry stems in his mouth.
"Well, that doesn't mean you gotta cross an ocean to get away from me!"
HERE

Title: The Ball Is Round (So that the Game Can Change Direction)
Author:

vail_kagami
Country: Germany
Characters: Dean, Sam (brief mention of Sam/Jess)
Rating: G
Warnings: brief mention of off-screen violence
Summary: Growing up as hunters in a tight family unit, there are many things Dean Winchester never expected his little brother to do. Becoming an international soccer star is one of them.
Also, it would have been nice if anyone had ever bothered to tell him. (Canon AU)

worldwide_spn Sports Challenge. I chose England and Cricket
Disclaimer: Don't own them, and for that they should be very thankful.

A/N: As I grew up in a Cricketing household; and Cricket is England's national summer game, I couldn't resist!

Cricket is an odd little game, which although surprisingly simple, confuses the hell out of a lot of people. It is responsible for some of the strangest phrases in British sport, with gems such as silly-mid-off, googly, wrong 'un, dibbly dobblies, cow corner, short legs and my personal favourite; bowling a chinaman.

So, this little tale will be predominately humour, plenty of brotherly humiliation, a little bit of whump, and a bit of case!fic, all set against the crack of leather against willow - the soundtrack of an English summertime. 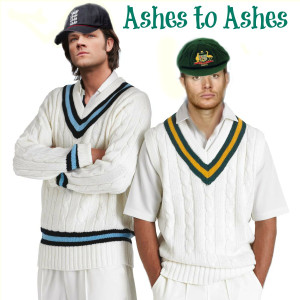 FIC UNDER THE LINK!
The brothers' new case leads them to entirely new experiences - with mixed results.

Also on AO3 Also on DW

A bit late, but the drafts/predictions are all in and with some negotiation we managed to work out a schedule. Since it's already some way into January and some of you would profit from a later posting date, I decided to spread posting out between January 15th and February 15th.

The dates are not set in stone. If any of you has been assigned a date that's inconvenient, let me know and I'll change it.

Thank you all for working so hard to provide at least a few results for this challenge!

It's time to send it the rough drafts, folks. However, since there are only very few participants this round and we have a whole month for posting, there's actually a lot of room for generousity when it comes to the definition of "rough draft". So this is how we'll do it:

You send your draft (which by no means needs to be finished) to the following eMail: worldwide_spn(at)yahoo(.)de (Replace (at) with @ and remove the brackets, you know the drift.)
The mail must contain the following information:

Your lj username
Is your story finished?
If not, will you be able to finish it until January 31st at the very latest?
Would you prefer a posting date at the beginning, in the middle, or at the end of January? (If you would like a certain date, name it.)


If there are any questions, this is the place to ask.

There are only six five people in this year's challenge, which on the one hand sucks but on the other hand it makes organizing this rather uncomplicated. This is how we will do this: By December 20th, the rough drafts of the stories have to be handed in. That doesn't mean that the fics haveto be finished, but it has to be clear that they are being worked on with the intention to get them done in time. For artworks there is no deadline before the individual posting date.

Posting starts on January 6th and the posting dates throughout January will be assigned by me. However, since there are so few works to be expected, the dates will be open to negitiation. So if your fic is still not quite done in the first days of January, we can find you a slot close to the end of the month. If you're done and eager to post, I'll be happy to let you do so as soon as possible - although I will attempt to spread the dates out as evenly as possible.

More on that when the time comes. For now, the next important date is December 20th.

Also, I need to apologize for being so absend for so long. Things have been hectic in my life, but they have calmed down some recently and I'll be more available from now on.

Summary: Historical AU (Northern Wales, 1284). As Edward I's army creeps forward in its painstaking invasion of Wales, one of his knights and his master architect pass the time lounging around on the mountains. Sir Dean of Winchester is, after all, a temptation too strong for human frailty to resist. Besides, Dean's wrists look really really good in those vambraces.
Pairing/Characters: Castiel/Dean. Edward I and Sam mentioned.
Rating: Explicit.
Length: 3900.
Warnings/Tropes/Other things: Knight!Dean, craftsman!Cas. Some mention of religious themes, corresponding uncertainty about how to understand homosexuality. As they're in the middle of a military campaign to subjugate Wales, there's some mention of the Welsh as primitive or traitorous.
Spoilers: None.
Author: Me.

So this is it, then - coming even later than expected, not that it made a difference. As it happens, real live is too hectic for elaborate texts at the meomtn. I'm going to tell the few who participate how we're goning to do this in a few days, when I actually have the time to formulate it.
Collapse